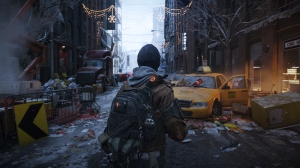 Believe it or not, this year’s E3 was more than Microsoft and Sony exchanging blows (or depending on how you saw it, Microsoft rocking in the fetal position). With new consoles means new gorgeous games to salivate over and Nintendo is always a safe bet to surprise, especially in a period where the Wii U needs to gain a firm hold before the new systems launch. But as much hype as pipeline titles like Star Wars Battlefront, Mirror’s Edge 2, Kingdom Hearts III and Halo have gotten, this list is reserved for titles that have shown off at least a little bit of gameplay.

Sci-Fi action studios need to take notice whenever Bungie tries something new, Destiny looks stunning. Set on Earth in the distant future, it looks like scavenging is a way of life for a planet taken over by aliens. But as much as Bungie is fantastic creators of worlds, Destiny looks incredibly similar to Halo from the weaponry to the 343 Guilty Spark knock-off.