Previously on The Walking Dead… 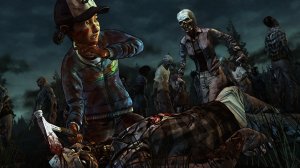 It is remarkable how much emotion reading those words evokes. Five words that set up the story for each chapter in The Walking Dead. But hearing it in Lee’s voice. Remembering what happened in that spectacular first season. Recalling the twists, the turns, the surprises, the choices and the ultimate conclusion.

Season two has an incredibly high standard to meet. END_OF_DOCUMENT_TOKEN_TO_BE_REPLACED

I originally wrote this review when I was working as an editor for my college newspaper. It is an interesting look at a game that, now five years later, still has a lot of stories to tell. While Grand Theft Auto IV has not remained the pinnacle of gaming that it was heralded as in 2008, the game still offers a unique turning point for how Rockstar Games would handle their games. GTA4 marks a shift to narrative and realism, not in the sense that the game is a crime simulator, but in that the worlds they create teem with life. GTA4 not only provides a glimpse of the direction of next week’s GTA5 but also provides evidence of the maturation of Rockstar. Simply looking at the games that followed GTA4 show that while gameplay still favors over-the-top theatrics, the worlds of Red Dead Redemption, LA Noire and Max Payne all have influence from GTA4.

Over the years, Grand Theft Auto has been both loved and criticized for its edgy open-world gameplay that lets players take on the role of a gun for hire as they climb the ranks of the criminal underworld. The new Grand Theft Auto IV, the first true numbered sequel since 2001’s GTA3, sheds much of the baggage that defined the previous generations of GTA titles. There is still plot-driven missions and the ability for the player to run amok on a crime wave across the city, but what is different about the game is how truly alive it feels. END_OF_DOCUMENT_TOKEN_TO_BE_REPLACED

Treyarch must often feel like the younger sibling in the Call of Duty family. When your older brother is Infinity Ward, the studio credited with placing Call of Duty on the map, being the underdog just comes with the territory.

Sometimes being the underdog has its perks, it allows you to experiment a bit more. While the game wasn’t as popular as European theater WWII titles and the Modern Warfare series, I found that Treyarch’s World at War to be a different take on the Pacific theater. Japanese ambushes, a different style of combat, and the hordes of enemies in the game’s finale all showed massive potential for a deeper look at the more misunderstood front of WWII. When Treyarch made Black Ops two years later, exploring the Cold War and the concept of sleeper agents, it was a bold move that showed the series still had the stones to try something a little different. In hindsight, Black Ops looks much stronger after the disappointing ending to Modern Warfare 3.

END_OF_DOCUMENT_TOKEN_TO_BE_REPLACED

I don’t know if I can legitimately label Pacific Rim a smart movie. Its source inspiration is after all, a man waving in a rubber suit, waving his arms and crushing cardboard mock-ups of Tokyo. And it’s not as if this style of entertainment has evolved terrifically over the past half a century because even the modern iterations of Power Rangers still has a men dressed in plastic armor clashing with men in rubber suits.

But Pacific Rim has clearly struck a chord with audiences who grew up on Kaiju films like Godzilla and Mothra, on action serials like Power Rangers and Ultraman and even the millions who adore mecha anime ranging from Macross and Gundam to Evangelion and Gurren Lagann. It is a beautiful homage to a genre that appreciates simplicity, because who doesn’t love robots smashing into monsters? END_OF_DOCUMENT_TOKEN_TO_BE_REPLACED

Fighting games often get accused of not evolving enough with new iterations. New balancing tweaks, a few new characters, new movesets for old characters. Ultimately, a new entry in a fighting franchise is judged by how it stacks up to its predecessors and whether or not it moves the franchise in a positive direction.

Soul Calibur, one of the first successful 3D fighters, has had a tumultuous history. Always respected and embraced for its addicting and deep blade based combat, where Soul Calibur has struggled is in delivering consistency in its story. To understand the story properly, multiple flow charts threading the array of characters would be needed just to establish relationships. Throw in the problems that arise when canon (anything involving Siegfried) and non-canon (Zalsalamel ending up with Soul Edge after 3) stories collide resulting a trip to a bookstore to pick up a copy of Soul Calibur Cliff Notes.

END_OF_DOCUMENT_TOKEN_TO_BE_REPLACED 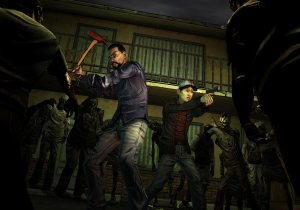 I’m not sure if I’d be able to survive the zombie apocalypse. If I learned anything from years as an outdoorsman, shooting rifles and shotguns for sport and exploring the sprawl of city life, I have a great deal of faith in my knowledge and skills. But if the zombie apocalypse is anything like the world depicted in The Walking Dead, I don’t know if I could survive the human aspect of it.

Clearly Telltale Games felt the same way. Their adaptation of the acclaimed graphic novel series and subsequent hit AMC television series is as much about surviving hordes of zombies as it is surviving with the stranger next to you. 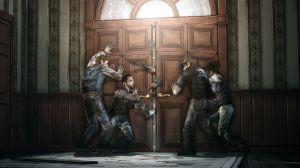 END_OF_DOCUMENT_TOKEN_TO_BE_REPLACED

When I heard that Codemasters was finally going to give Grid a proper sequel, I was pretty excited. After all, the original Grid was one of my favorite racers from this console generations early years. A title that maintained a sound balance between the open accessibility of an arcade racer and with the physics and damage model comparable to a simulator. Packed in with a fantastically open career mode that allowed you to select regions to race in with events catered to that region’s racing style, and Grid had a little something for every racing fan.

Grid 2 maintains much of what made the original title unique; a light story featuring an up-and-coming driver, a multitude of global race styles with plenty of race specific vehicles to select from. You assume the role as a faceless driver, much like how you did in the original Grid. But instead of starting your own racing team, you are the catalyst for a billionaire’s dream of creating his own racing league, the World Racing League. Your goal is to travel the globe, challenging the best racing teams at their own styles of racing, to get them to compete in this fledgling league. The more you compete and win, the more fans you and the league will garner unlocking new races, promotional challenges and netting you new opportunities to increase your stable of cars. Although the concept of fans being the closest thing to currency in Grid 2 is a stretch, providing the groundswell for the World Racing League is a nice veil to drape over what is essentially a linear career mode. END_OF_DOCUMENT_TOKEN_TO_BE_REPLACED

Theory Flaw
Create a free website or blog at WordPress.com.